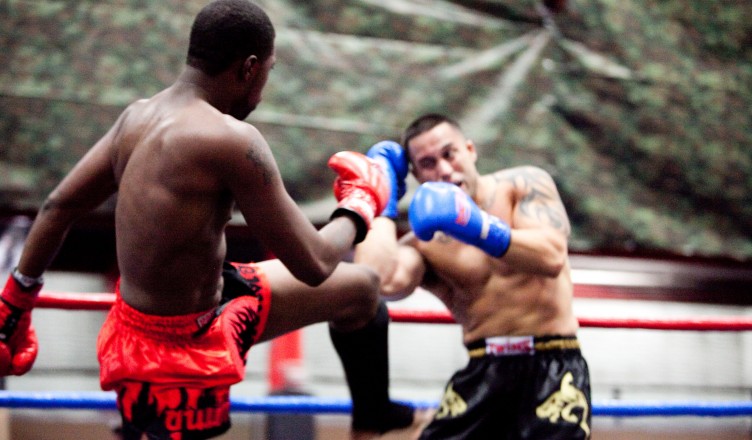 There are hundreds of martial arts techniques out there, and many of them are good for self-defense. Choosing the right system for defending yourself can be overwhelming, but it doesn’t have to be. Muay Thai is an extremely effective system when it comes to self-defense, and one that everyone can learn. With property crimes on the rise, it doesn’t hurt to be ready to defend yourself and your property should the need arise.

Almost all fights start from a standing position. And unlike many other traditional martial arts that focus on hands-only techniques, Muay Thai prepares you for a standing fight. It focuses on punches, elbows, kicks, and knees. It covers all types of striking and is more practical for a no-rules combat situation – which is what you would likely find when defending yourself on the streets.

The striking in Muay Thai is particularly effective because it’s designed for a combat situation. While many other types of martial arts use striking in points competitions, Muay Thai doesn’t focus on tapping an opponent so you can get a point. Instead, it focuses on knocking out an opponent. The strikes, specifically the kicks, are considered some of the most powerful in the world of martial arts. A single Muay Thai round kick to the leg can cripple an opponent.

Although most fights start standing up, most fights end-up on the ground. And you don’t want to be the one in a bad position. Muay Thai teaches you how to use trips and throws to get your attacker to the ground before he can do the same to you. And if your attacker tries to take you down, Muay Thai teaches you how to defend against several types of takedowns.

3. It’s all about controlling your opponent

One of the unique aspects of Muay Thai is the clinch. And this is not like what you see in boxing, where both fighters hold each other for a few seconds in a silent dance. In the world of Muay Thai, a clinch involves you grabbing your opponent with your forearms around his neck. From this position, you can control his body and even get him to the ground. You can even learn how to throw devastating knees from this position. More importantly, with a good clinch, it doesn’t matter how big your attacker is. In a real-world situation, the clinch is very useful.

4. It prepares you for the adrenaline

Not many martial arts involve intense sparring. Although it’s usually optional, sparring is a major part of training in Muay Thai. It’s like being in a real fight, although there are rules. Most of the time, sparring is limited in intensity and kickboxing rules apply. Even so, it gives you a chance to see how it feels to have someone attack you.

There’s no way to know how you’ll react when someone is threatening you, and sparring prepares you for that. It also prepares you for taking a hit. Getting punched with 16 oz gloves at limited power won’t likely leave a bruise, but it will teach you how to stay moving and focused after you take a hit.

Then there’s the adrenaline rush. It’s hard to control yourself when you have adrenaline coursing through your veins, like there would be in a self-defense situation. Sparring has the same effect on your adrenaline as being in a dangerous situation, without the brutal consequences.

5. It gives you confidence

A little confidence goes a long way. When you train in Muay Thai, you can’t help but develop confidence. It makes you walk the streets with your head held high, and sometimes that’s enough to prevent people from targeting you for a crime.

There is a long list of reasons why Muay Thai is a great martial art, and the fact that it teaches you self-defense is at the top of that list. If you’re looking for a way to defend yourself, Muay Thai is worth trying.